Owning a German Shepherd is a statement. They are a large, powerful, and beautiful breed.

They are also well known for their many jobs and services, such as agility, tracking, protection, herding, law enforcement, military K9s, sport work, search and rescue, guide dogs for the blind, and therapy dogs. Last but not least, German Shepherds are loyal companions and family dogs.

Die-hard shepherd owners who love this breed to the moon and back will be the first to admit this intelligent and energetic breed isn’t for everyone.

10 Facts About Owning a German Shepherd

Here’s the low-down on the good and the bad about owning a German Shepherd in no particular order.

1. People Will Ask if Your German Shepherd is a Police Dog 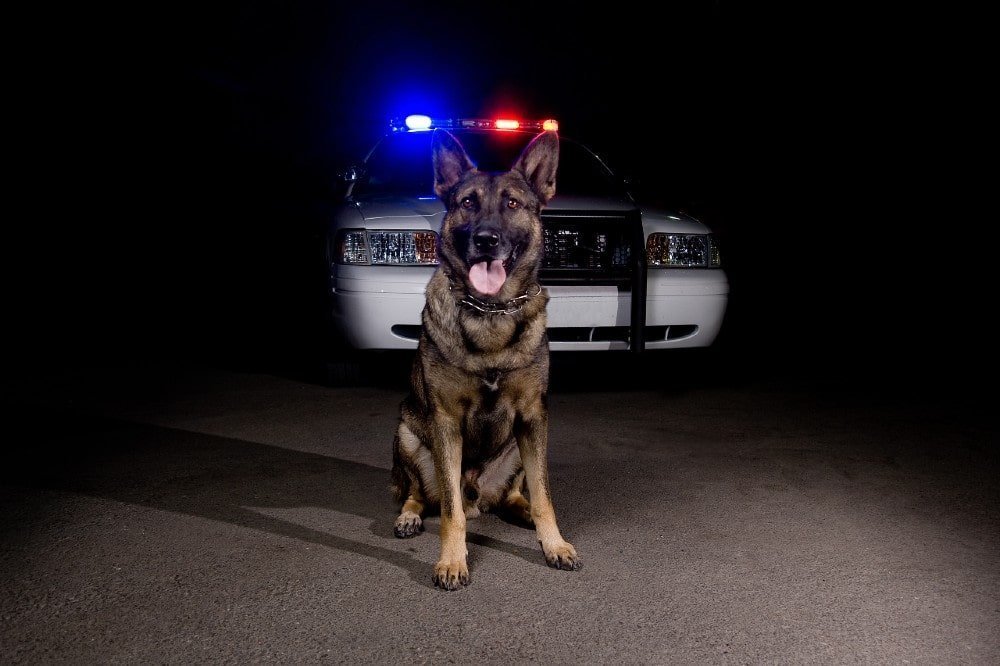 K9 officers often do demonstrations and meet and greets with their four-legged partners at schools and local community events. This is why young kids often assume all German Shepherds are police dogs. It’s Saturday morning, and you are looking forward to catching up on some sleep. Not a chance with a German Shepherd who will pester you to rise and shine. A hungry tummy and the need to take care of morning business are more important than beauty rest.

The same is true for routine walks, snacks, and dinner time. Dogs thrive on routines and are the first to let you know when things are running behind schedule. 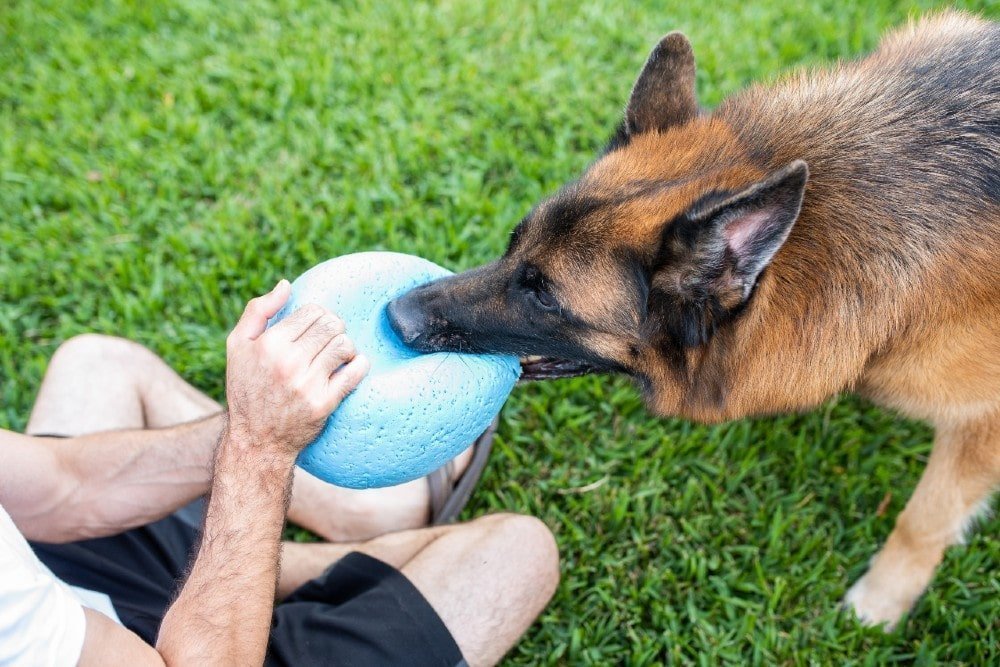 German Shepherds are a working dog breed packed with a lot of drive, which equals a lot of energy that needs to be managed and burned off.

German Shepherds require mental and physical interaction with their owners and environment. Daily walks, playtime, or exercise are non-negotiable with this breed.

If you cringe at the thought of being outdoors playing and exercising with your dog daily, a German Shepherd is not the breed for you. 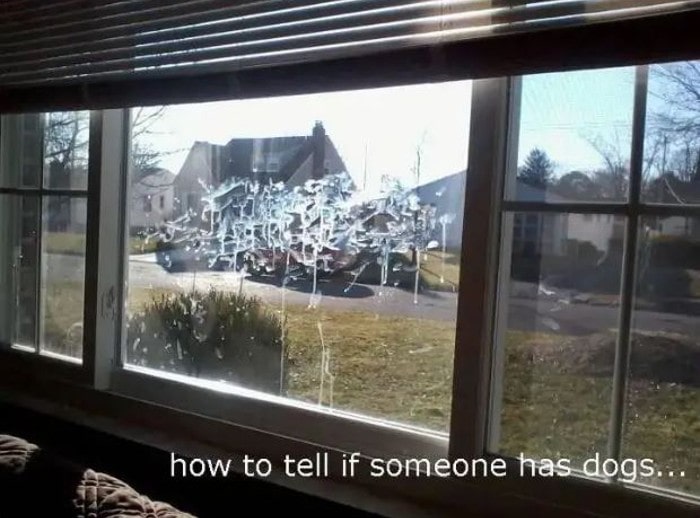 German Shepherds are instinctively a nosey breed. This trait will become evident with every window or glass surface your GSD has access to being smudged with nose art.

Parents of small children display artwork on the refrigerator, and German Shepherd parents have nose art on windows. Like nose art above, German Shepherd hair in your house, on furniture, in your car, and on clothes is just part of owning and loving a German Shepherd.

Regardless of how much you vacuum or sweep or how many strategically placed lint rollers you own, dog hair lurks somewhere in a closet, under furniture, or on a laundered clothing item you haven’t even worn yet.

German Shepherds shed year-round but shed excessively for two to four weeks when they blow their coat during spring and fall months.

Regular brushing, grooming, and a quality diet can help minimize shedding, but shed happens and is part of loving a GSD.

6. German Shepherds Are Protective of their Humans and Property German Shepherds are instinctively protective of their surroundings and the people they love. This is a job they take very seriously.

A squirrel in the backyard may not be a big deal to you, but your German Shepherd views this as a hostile invasion not to be tolerated.

Anyone visiting your front door unannounced will be greeted with serious and aggressive big dog barks. If your GSD has visual access to public streets or sidewalks, expect to be alerted when people have the nerve to pass by.

Click HERE to read about a German Shepherd who kept a missing 5-year-old boy safe.

7. People will Avoid Your German Shepherd People will cross the street or move clear of your path when you walk with a German Shepherd.

Delivery drivers may toss packages towards your front porch or door to maintain a safe distance from your indoor GSD alarm system.

Guests visiting you at your home may be more comfortable if your German Shepherd is restricted to a different area of your house.

8. German Shepherds Are a Nosy and Needy Breed German Shepherds are pack animals which means they want and need to be with their humans (pack) as much as possible to thrive.

German Shepherds are lovingly referred to as Velcro dogs because where you go, they will follow.

Working in the yard? A German Shepherd will be nearby to keep a watchful eye over you and investigate any changes to their yard.

Opening packages or putting groceries away? A nosy German Shepherd will have their head in bags or thoroughly sniff over new items in their house. German Shepherds are curious by nature which means they are, more often than not, in the way of whatever you are doing.

Working from home? A German Shepherd will stay close by to keep you company.

Need to get the mail? A German Shepherd needs to go with you. How else can they protect you?

Need to go to the bathroom? Yep, a German Shepherd thinks their presence is necessary there, too, and has no concept of privacy. If peeing or showering by yourself is a must, a worried GSD will be waiting for you on the other side of a closed door. If you don’t train a German Shepherd, they will train YOU and run your house.

German Shepherds are intelligent dogs, making them easy to train. However, German Shepherds lacking attention, training, and boundaries will lead to mischievous and destructive behaviors.

German Shepherds will push and challenge their pack authority and position within their family structure. Owners must make it clear they are in charge by consistently enforcing rules and boundaries, especially during the first two to three years when they will test much like teenagers.

10. A German Shepherd Will Be the Best Friend and Best Dog You Ever Have The German Shepherd is a beautiful, smart, protective, and loyal breed.

The items listed above may seem like annoying misconceptions or a lot of time and effort required to own this breed.

It is true that German Shepherds need training and exercise to stimulate them, an active and engaged owner, and strong leadership.

However, the time and effort put into a German Shepherd will be reaped for many years to come. The GSD is eager to please, easy to train, and loyal to a fault.

When you bond with a German Shepherd, routines become a well-oiled machine and you will begin to communicate non-verbally. Your GSD will learn what is expected of them, learn your body language, and tune into your emotions.

A German Shepherd will turn heads out in public and deter others with their size and reputation, which can be a good thing in some situations.

A German Shepherd is a best friend who is always excited to see you and hear about your day, ready to ride shotgun while you run errands, explore a new hiking trail, or settle down with you to watch a movie at the end of the day.

A German Shepherd is a companion who will also do everything in its power to keep its loved ones and property safe.

The companionship, trust, unconditional love, protection, and loyalty German Shepherds give to their owners is worth dirty windows and vacuuming dog hair.