Meet Kaya and Hades. Two German Shepherds who love cuddling, long walks together, and have a fairytale romance that will brighten your day. Kaya is a White Swiss Shepherd. Hades is a Black German Shepherd. Their contrasting colors, make the duo a gorgeous couple. For richer or paw-er, the two crazy kids decided to tie the knot. It’s unclear who popped the question, but Reddit user Gallowboob shared the wedding picture and made the event internet official.

Like many a bride, Kaya wore white, and Hades looked dapper in a black tux that he provided the tail for. Rumor around the dog park was Kaya kept her groom on a short leash. Soon Kaya yearned for a pack of her own. She’s pictured here practicing with available friends. 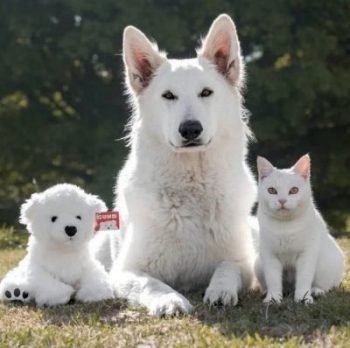 Kaya’s owners took the hint, and soon a Finnish Spitz made three The new addition was smitten. It’s been a few years since Kaya and Hades howled their I do’s and became an internet-famous doggy power couple.

If you like happily ever after fairytale endings, you’ll love Kaya and Hade’s update.

As you can see from this New Year’s Day 2022 picture, their pack has grown.